In the summer of 2008, UPM ProFi Deck proved how well it works under the feet of over 20,000 quality-conscious music fans at the Flow Festival in Helsinki, Finland. The three-day urban rhythm music festival is part of the Helsinki Festival and showcases top rhythm music, indie rock and pop artists in a design-influenced setting. In 2008, the Flow Festival was organised for the fifth time and its popularity has increased steadily over the years.

The organisers wanted to invest in the festival area’s planning, material choices and stylish appearance, with particular emphasis on ecology. The floor for the festival’s gourmet restaurant was made from UPM ProFi Deck. The floor had a playful square pattern, which changed from Snow Blue to Autumn Brown as one moved through the restaurant. The floor was designed by architect Juhana Heikonen.

“From an architect’s perspective, the co-operation between Flow and UPM was an interesting project, because UPM ProFi Deck is ideal for making large areas enjoyable. Together with architecture student Ville Karhu, I created a colour pattern based on a modular system that used all available UPM ProFi Deck colour options. Besides the colour palette, easy workability and a ready product solution were critical factors when choosing the material,” says Heikonen.

The innovative design floor was at home in the Flow Festival and kept good company with renowned Artek furniture and restaurant Kuurna’s gourmet food.

Festival restaurant designed by architect Juhana Heikonen.
Floor assembled from UPM ProFi Deck modules, with UPM ProFi Deck colours.
Launched at the Helsinki Flow Festival in the summer of 2008.
The floor will be reassembled for the same purpose for the following three to four summers. 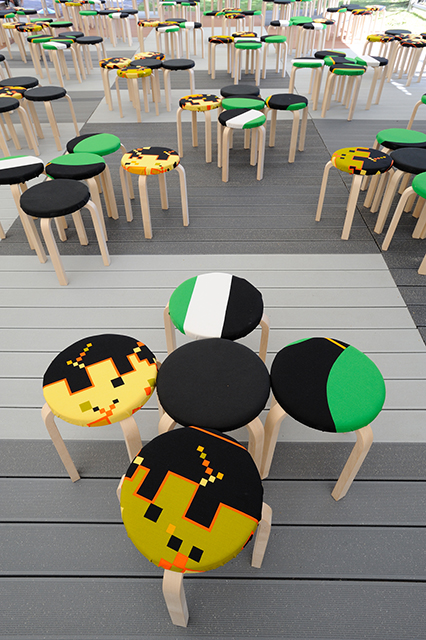